London, England, June 21, 2011 – Feuding operators of private jets and helicopters are set to battle for supremacy again, but not in the skies – on a polo field. 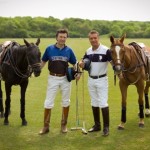 Preparing to take to the field of battle

George Galanopoulos, LEA’s managing director and team captain, says: “Polo might not seem the obvious solution, but we will finally discover who rules executive aviation – fixed wing or rotary aircraft.”

A member of Ascot Park Polo Club, Galanopoulos has actually only been playing polo for three years, before which he had never even ridden a horse. His rival captain, on the other hand – RotorMotion’s managing director Philip Louis Amadeus – is a Hurtwood member and has been playing for 15 years.

Amadeus says: “Professional rivalry aside, George and I are good friends. When I started thinking about our shared love of polo, a challenge match seemed a natural idea. George agreed, and now we can’t wait for the day to come.

“We’re inviting everyone involved in the business aviation industry along, with their partners and children, to share the day with us.”

Gates open at 12:00, with the match itself beginning at 13:00. A traditional Argentinean asado (barbecue) and drinks will run through until 16:00. Robert Burke, a highly respected polo coach and, appropriately, a former test pilot, will be commentating on the match and explaining the rules for novices.

Amadeus concludes: “We’d love to make the challenge an annual event and invite other teams to compete too next year.”