This week we’re celebrating the news that 8020 team member Julia Craggs has been shortlisted for the PRCA Reginald Watts Award. This annual prize commemorates the thought leadership, writing and forethought of the late Reggie Watts, who helped shape the UK’s PR industry. The scheme sees young participants challenged to write thought-provoking essays on the PR and communications industry. As a PR consultancy committed to writing excellence, we’re really proud of Julia’s achievement and are looking forward to attending the awards ceremony with her next month. We’re delighted to share Julia’s shortlisted entry with you below.

“Public relations today is horrible. Any dope, any nitwit, any idiot can call him or herself a public relations practitioner.” [Edward Bernays, 1991] Is he right?

Bernays evidently considers himself – and is – above his own insult. Look at the composition of the statement itself: pure rhetoric. His tricolon rises to a crescendo with ‘idiot’ as he blends the vowel sounds of ‘dope’ and ‘nitwit’, creating a half-rhymed trio that is distinctly (and lyrically) wounding. To drive home his derision the synonyms’ sounds as well as their meanings are repeated, a sense compounded by each clause’s opening on ‘any’. He is direct, throwing down his disgust at the industry three times over. Like any classical rhetorician he opens strong, shocks us into submission and executes his goal: closing our minds to the power of PR.

Rhetorical brilliance, however, does not automatically make an argument right, and clear flaws are apt to hide beneath eloquence. Here, the mistake is in Bernays’ use of ‘today’. Since the ‘today’ of 1991, The Cluetrain Manifesto has revolutionised our understanding of how an internet-age marketplace would – and, now, does – look. With inter-networked markets and intra-networked employees[1] talking to each other, independent of an organisation’s official ‘voice’, PR practitioners have had to become smarter, and more nuanced, to be able to participate in the conversation. The marketplace, and we, have evolved almost beyond recognition.

Yet it is vital to remember what Bernays said in 1952, that the building blocks of PR – ‘informing people; persuading people; integrating people with people’[2] – are practically as old as society. It doesn’t matter whether we’re engaging in top-down, centuries-old persuasion of the people, or chatting laterally to them on Facebook. However much we change with the times, the ‘people’ part of PR has always been, and will always be, paramount.

Survival of the fittest?

Nevertheless, there’s something to be said for Bernays’ intuition when describing PR practitioners as a bit simple. For in nature, it’s often an organism’s simplicity that enables it to survive. Take the single-celled bacterium. Thanks to its uncomplicated structure, newly adapted DNA is less likely to be incompatible with existing genetic material, leading to rapid evolution. This innate simplicity is also what makes PR capable of filling adaptive niches as soon as they open, ensuring our continued survival. We’ve kept person-to-person connections firmly at the centre of all we do, which allows us to merge our DNA with other corporate organisms as and when it suits us. We’ve cherry-picked bits from IT, finance and advertising: keeping crisis management on the ball with social media-scanning tools; measuring a campaign’s ROI; telling stories through creative imagery to catch eyes in a visual world. This challenges head-on the notion that simplicity is somehow bad. Sticking to our roots is a bold move, but a canny one; for it is only by staying simple that we can act so nimbly, quickly evolving new niches in times of rapid change.

Relationships and rhetoric are PR’s base pairs, and are fundamental to any constructive communication. They’re the key to generating a conduit between brand and target market (be it B2B or B2C); though they’re useless if we fail to recognise why they hold such power. The answer lies in being smart enough to spot the common denominator in every meaningful interaction we have – our collective humanity; us.

When multiple divergent reactions can follow a single announcement, and the Internet’s democracy of uncontrolled influence can sink reputations in seconds, PR practitioners must dig deep to facilitate the positive while listening (and responding) to the negative. This is where relationships are essential: the human psyche is a complex beast, but some patterns inevitably repeat themselves. 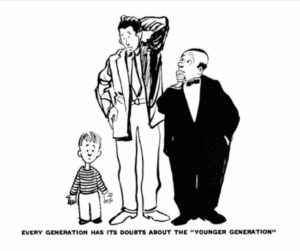 Bernays’ comments reveal one such pattern of psychological behaviour. It is undoubtedly painful for a previously influential commentator to slide into irrelevance as society moves forwards without them. Indeed, Bill Mauldin’s satirising of the phenomenon in a 1950 edition of Life[3] (right) shows that this kind of generational panic is universal. Such words cry out not only for a clever PR response, but an emotionally intelligent one – a skill that, if not innate, requires immense patience to learn.

Although one-to-one cross-channel chatting is not a realistic proposal, such examples make plain the need for a deep-rooted core of intelligent empathy within the industry. Remembering the person reading a press release (or trolling on Twitter, or making grand pronouncements about PR’s future) is, beneath the bluster, a person – this is when effective PR is produced.

Base pairs in action

Relationships rely on mutual understanding, facilitated by quality communication that feels like conversation. Enter rhetoric.  The hyper-accelerated diffusion of information that occurs across digital platforms now demands nuance not only in what we say, but when, how, and to whom. For instance, Southern Rail’s decision to put work experience teenager Eddie in charge of their Twitter illustrated that astute PR can often take as little as giving consumers an interaction with an innocent face. The move doubled ‘positive sentiment’ towards the operator from 17% to 40%.[4]

Likewise, despite many PR missteps, British Airways’ social media remains popular, regularly proving the old adage that a picture is worth a thousand words with tweets containing photos and videos hitting double the retweets of text-only offerings. Loyal followers also won’t abandon the brand in tricky times thanks to BA’s adoption of ‘fan’ hashtags (#avgeek), while mass appeal is perpetuated by big-name endorsements (Kings of Leon[5]). Though what makes ‘good’ rhetoric now may include a timely deployed GIF or meme, the essentials of the form remain consistent – communicating with humour, elegance and humanity. Skills not the preserve of nitwits.

The future is human

While consumer-targeted digital advertising, thought to be the future of modern marketing, has been revealed to be plagued by fraudulent click-bots, the power of rhetoric and relationships in PR practice remains undiminished. As companies such as Proctor & Gamble[6] slash digital advertising budgets and look again to traditional PR, we must remember that evolving to fit a new environment only works when we keep what is demonstrably effective central to our practice. We must, therefore, be smart – and keep our industry simple – to survive.