London, England, January 5, 2009 – Guernsey is to become home to the latest thing in private jets, when top charter operator London Executive Aviation (‘LEA’) bases one of its new Cessna Citation Mustangs on the island this month.  The four-passenger Citation Mustang is the first of a new generation of ‘Very Light Jets’ and has enabled LEA to cut the price of private jet chartering by up to 40 percent.  One is to be permanently based at Guernsey Airport to serve the local and neighbouring populations, making LEA the first private jet operator to establish a presence on the island. 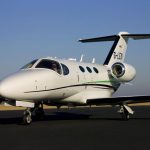 LEA, which is one of Europe’s largest private jet companies, in January 2008 became the first to introduce a Citation Mustang to the British Isles, and in June was the first in Europe to launch a fleet of the aircraft.  LEA presently operates five Mustangs, alongside five other classes of larger business jet.  Its Mustang fleet will grow to 10 by mid 2009, which will make LEA the largest operator of the aircraft in Europe.

The comparatively low operating costs of the Mustang have enabled LEA to slash its charter prices, making the Mustang available for the equivalent price of a traditional turboprop aircraft.

The Mustang offers virtually all the attractions of a larger business jet, but in a more compact package.  According to LEA’s managing director George Galanopoulos it is ideally suited to the European market and to Guernsey:  “Most charter demand in Europe is for short haul flights of less than two hours, and for groups that seldom exceed three passengers.  The Mustang is absolutely perfect for this sort of travel, with limousine-like comfort and ample pace, but at a fraction of the cost of conventional midsize business jets.”

“We think the Mustang is ideal for Guernsey’s business community,” he continued.  “Whether you need to reach London, the North, the Midlands or France, the Mustang gives you total control of your travel at a very competitive price.   With a private jet, you decide your destination and schedule and then leave the details to us.”

Despite the looming global recession, LEA believes this is an excellent time to launch such a service in Guernsey.  “Not only does the Mustang significantly cut the cost of business aviation, but it does so at a very interesting time,” says Galanopoulos.  “Every crisis creates opportunities and many of Guernsey’s business leaders have proved themselves adept at spotting undervalued assets.  To really seize these opportunities you have to move quickly, and the Mustang can have you at your destination while the competition is still stuck at the airport.”

For leisure travel the attractions are also obvious, he adds.  “A private jet gives you an almost limitless range of destinations to choose from and spares you the hassles of changing flights at congested airports.  If you need to make the most of your leisure time, the Mustang can significantly increase the quality and length of your holiday.”