London, England, May 19, 2008 – A new era of low-cost private jet travel was launched today by London Executive Aviation (‘LEA’) at Europe’s largest conference and exhibition for the private jet industry.  On press day of EBACE 2008 in Geneva, LEA announced that it will this month become the first UK charter operator to roll out a fleet of Very Light Jets (‘VLJ’), enabling it to cut the price of jet chartering by up to 30 percent.  This new ‘Air Taxi’ service is expected to significantly broaden the market for private jet travel, appealing to smaller organisations and lower levels of management. 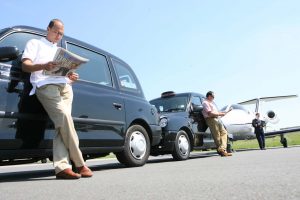 LEA, which is one of the UK’s largest private jet charter operators, this month begins operating a fleet of five Cessna Citation Mustang jets.  This makes the company not only the first UK Mustang fleet operator, but also one of the very first in Europe.  A further five Mustangs will join its fleet by early 2009, making LEA one of the largest VLJ operators in Europe.

LEA intends to grow its Mustang fleet significantly beyond ten aircraft, and is presently in talks with investors to secure funding for a follow on order.

Cessna’s four-passenger, two-crew Citation Mustang is presently the only fully operational entry level business jet in the world, and is leading a new class of small aircraft that many commentators predict will transform business aviation.

The Citation Mustang has a top speed of over 390 miles per hour (340 knots) and a range of over 1,300 miles (1,100 nautical miles with JAR-OPS reserves), permitting non-stop flights from the UK to as far away as Southern Spain or Russia with two passengers, or to Italy or Poland with four passengers.  Flying at a maximum altitude of 41,000 feet, the Mustang is able to operate above most weather and commercial airline traffic, achieving a smooth and comfortable flight for passengers.

The Mustangs will be based at Luton, Stansted, Biggin Hill and Farnborough, ensuring that LEA has coverage of the four ‘corners’ of London.  The aircraft will position to London City, Northolt and other locations as required.

LEA is confident of strong demand for the new fleet, having gradually introduced a single Mustang over the past two months to educate the market about its capabilities. “As Cessna is the world’s largest producer of business jets, we were always confident that the aircraft would be safe and reliable,” said LEA chief executive Patrick Margetson-Rushmore.  “What we were waiting to see was how passengers would respond to the more compact cabin, but it turns out that they really like it.  The plane is cleverly packaged, like a modern luxury car, so there is actually plenty of space for four to work or relax.”

“We couldn’t have foreseen the state of the economy when we ordered the Mustangs five years ago, but in fact this is the perfect time to introduce these aircraft,” said managing director George Galanopoulos.  “Flight times for typical journeys are identical to larger aircraft, so why pay extra for a bigger jet if half the seats are empty, or use a plane with less efficient engines?  For most European trips, the Mustang really is the right tool for the job, and it’s a very attractive alternative to clogged and congested airports.”

Those wishing to enquire about chartering a Citation Mustang should contact LEA on +44 1708 688 420 or visit www.flylea.com.

London Executive Aviation is one of Europe’s largest executive aircraft charter operators and was named Best General Aviation Operator in the Baltic Air Charter Association’s 2007 and 2006 Excellence Awards.  LEA is the only executive aviation company with a full base at London City airport; it operates five further bases around London.  LEA is owned by its management and has maintained a record of unbroken profitability since it was founded in 1996.  More information can be found at www.flylea.com

Based on unit sales, Cessna Aircraft Company is the world’s largest manufacturer of general aviation airplanes. In 2007, Cessna delivered 1,272 aircraft, including 387 Citation business jets, and reported revenues of about $5 billion. Cessna has a current backlog of $14.5 billion. Since the company was originally established in 1927, some 190,000 Cessna airplanes have been delivered to nearly every country in the world. The global fleet of more than 5,100 Citations is the largest fleet of business jets in the world. More information about Cessna Aircraft Company is available at http://www.cessna.com.

Further details on the Cessna Citation Mustang are available at http://mustang.cessna.com/home.chtml

Details about EBACE 2008 are available at http://www.ebace.aero/