We’ve been banging on for a while now about the Amazon Kindle e-reader and how it offers perhaps the best chance to rescue the ailing newspaper industry from its structural financial decline.  The idea is getting some more airtime now following the launch of the second generation Kindle, which improves on many of the features of its forerunner.  The Economist recently gave its views on the topic and now PR uber-blogger Steve Rubel has weighed in on his MicroPersuasion blog. 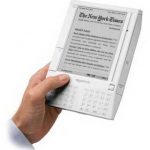 Early accounts of the Kindle 2 are broadly positive – it supposedly remedies many of the interface issues that blunted the appeal of the original.  However, Leo Laporte flags up on TwiT 184 that books – for which the Kindle was originally conceived – work better than newspapers on the device.  It’s true that there’s something about how we browse a newspaper that requires you to be able to scan laterally and vertically and zoom in and out for the items that interest you.  Perhaps what we need to hold our breath (and wallets) for is a Kindle 3.0 that incorporates Apple’s truly amazing touch screen browser capability.  Right now, the Kindle screen isn’t touch sensitive but you soooo want it to be.

The other crucial factor is, of course, price.  Buy a Kindle 2 today and you need to part with a hefty $359.  Despite the fact that Amazon supposedly can’t build the things quickly enough to meet current demand, the price needs to come down to the far more manageable $100 level (or the magic $99 according to John C Dvorak) if the Kindle 2 is to become the mainstream device that the print media needs to save its bacon.  Dvorak – a man who knows a thing or two about tech – says that Amazon needs to get its parts costs down to $25 to achieve this.

Rubel also has a good take on this, saying that publishers should subsidise the cost in return for preloading subsciptions to their electronic publications, feeling fairly confident that once the customers have tried it they will keep renewing their subscriptions year after year.  That sounds like a pretty plausible argument to us, and a much better bet than the route the Hearst corporation is apparently taking in developing their own rival to the Kindle, an idea given a good hosing here by Gawker.

All the signs are that the Kindle 3/4/5… (and it will be the Kindle, unless one other all-conquering product emerges – don’t imagine that Apple isn’t thinking about this) may ultimately do for the consumption of text what the iPod has done for the consumption of music.  The question is whether the publishers can develop business plans that support this potential escape route rather than obstruct it.