How do you get busy journalists to really understand your product, especially if it’s technical?  Even with B2B publications this can be a challenge, particularly when the competition superficially seems to be making similar claims for their wares.

Today we organised a highly successful media briefing session for KDS to tackle this issue head-on.  KDS has great technology, and together we generate a lot of news about the business to ensure that its profile remains high.  However, a quick poll of the top travel trade journalists revealed that many still found it hard to pin down exactly what sets KDS apart, given that so many players seem to be offering similar things.

Over two hours, KDS’s top executives gave an informal briefing to a group of the UK’s most influential travel editors and writers (followed by an even more informal lunch!).  It gave a chance for KDS to explain itself more fully than is normally possible in an interview, and let the press ask the questions they’d always wanted to but for some reason hadn’t. 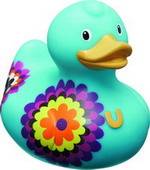 It seemed to work.  Mike Toynbee, editor of Buying Business Travel, summed up the mood by saying a big thank you for such a genuinely useful event.

And to round things off, everyone went home with a designer rubber duck, KDS’s new mascot for its campaign to improve expense management in the post-Duck Island era!