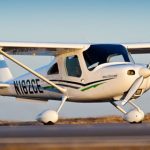 “The need for a modern, cost-effective two-seat trainer aircraft has never been greater, and we believe we are well positioned to meet that need,” said Cessna Chairman, President and CEO Jack J. Pelton. “The SkyCatcher program is an important part of our strategy,” he added.

Cessna has produced more than 192,000 aircraft over the past 82 years, including the classic 150/152 and 172 models which have been the backbone of flight training for decades.

In the most recent incident on March 19, Pelton said the aircraft was undergoing a very aggressive spin test regime – power on and cross-controlled – when it entered a spin that was not immediately recoverable. This spin test was one of more than 500 flown to date using various combinations of center-of-gravity positions, power settings, flap settings and control inputs. The pilot deployed the airframe parachute in accordance with the flight test procedure and emerged from the aircraft unhurt after it touched down.

Last September, an earlier test aircraft was destroyed when the pilot parachuted to safety after being unable to recover during aggressive spin testing.

“We test all our aircraft well beyond the limits of what is expected in normal operation. By the time a Cessna aircraft enters service we have the highest degree of confidence in the design, flight characteristics, manufacture and quality of the aircraft,” Pelton said, adding that company engineers have obtained valuable data on the crashworthiness of the aircraft and the operation of the Ballistic Recovery System (BRS) airframe parachute as a result of the two incidents. The BRS is offered as an option on the SkyCatcher.

“We are making every effort to minimize the impact on deliveries to our customers,” he said.

The SkyCatcher is a two-seat Light Sport Aircraft powered by a 100 horsepower Continental O-200 engine. The program was launched in 2007.

Based on unit sales, Cessna Aircraft Company is the world’s largest manufacturer of general aviation airplanes. In 2008, Cessna delivered 1,301 aircraft, including 467 Citation business jets, and reported revenues of about $5.662 billion. Cessna has a backlog of $14.5 billion as of December 31, 2008. Since the company was originally established in 1927, some 192,000 Cessna airplanes have been delivered around the world, including more than 5,700 Citations, making it the largest fleet of business jets in the world. More information about Cessna Aircraft Company is available at http://www.cessna.com.

Textron Inc. is a $14.2 billion multi-industry company operating in 28 countries with approximately 42,000 employees. The company leverages its global network of aircraft, defense and intelligence, industrial and finance businesses to provide customers with innovative solutions and services. Textron is known around the world for its powerful brands such as Bell Helicopter, Cessna Aircraft Company, Jacobsen, Kautex, Lycoming, E-Z-GO, Greenlee, Textron Systems and Textron Financial Corporation. More information is available at www.textron.com.

Forward-looking Information: Certain statements in this release are forward-looking statements and speak only as of the date on which they are made, and we undertake no obligation to update or revise any forward-looking statements. These forward-looking statements are subject to risks and uncertainties that may cause actual results to differ materially from those contained in the statements, including but not limited to the following: changes in worldwide economic and political conditions that impact demand for our products, interest rates and foreign exchange rates; the interruption of production at our facilities or at our suppliers’ facilities; the timing of new product launches and certifications of new aircraft products; the occurrence of slowdowns or downturns in customer markets in which our products are sold or supplied; changes in aircraft delivery schedules or cancellation of orders; the launching of significant new products or programs which could result in unanticipated expenses; changes in national or international government policies on the export and import of commercial products; and bankruptcy or other financial problems at major suppliers that could cause disruptions in our supply chain.