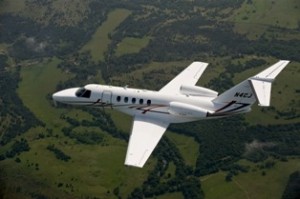 The Citation CJ4 is the newest and largest member of the popular CJ family of business jets consisting of the Citation CJ1+, CJ2+ and CJ3. The CJ4 is approved for single-pilot operations and shares a common pilot type rating with the other CJs (a pilot rated to fly any one of the CJs is rated to fly them all). Retail price in 2010 dollars for a typically equipped Citation CJ4 is $9 million.

The final results of extensive flight testing have validated significant performance enhancements including a takeoff distance of 3,130 feet (954 meters) at maximum takeoff weight, capable of a direct climb to 45,000 feet (13,716 meters) in just 28 minutes, a maximum speed of 453 knots (839 kilometers per hour), a range of 2,002 nautical miles (3,710 kilometers) with two crew and five passengers, and a landing distance of 2,700 feet (823 meters) at maximum landing weight.

The aircraft will debut the new Williams International FJ44-4A electronically controlled (FADEC) engines which gained FAA certification on Feb. 2. The cabin can be configured for up to eight passengers with a standard, belted aft lavatory. The Citation CJ4 also debuts the Rockwell Collins Venue cabin management system that includes BluRay DVD with HD monitors, moving maps and XM radio.