EBACE, Geneva, May 4, 2010 – The mini-boom in bookings following the recent volcanic ash cloud fiasco underlines why businesses depend upon executive aviation, but a survey by operator London Executive Aviation (LEA) shows that it is not just in a crisis that people turn to business jets. 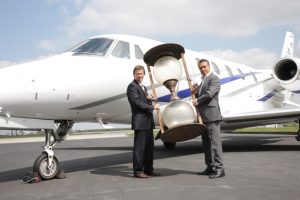 “Once airlines started flying again, they still had to clear huge passenger backlogs, so companies and individuals remained stranded,” says LEA’s chief executive Patrick Margetson-Rushmore. “In contrast, our business jet fleet could set off immediately, so we were immensely busy transporting people around Europe.

“However, even before this crisis, there were clear signs that when passengers want certainty and efficiency in their travel plans, they turn to business aviation,” he adds. “For example, we’ve seen a definite increase in interest in our services throughout the British Airways cabin crew dispute.”

Time-saving convenience was named by a huge majority – more than 90% of respondents (90.7%) – as the greatest benefit of executive aviation in LEA’s ‘Business Travel Survey 2010’.

Margetson-Rushmore explains: “Companies that use business jets are quite simply more productive than their competitors. If you bravely invest in securing a competitive edge in an economic downturn, there’s a very good chance you’ll hold onto the advantage when the market recovers. Or your executives can spend hours every day waiting around in airport terminals; it’s up to you. Business jets are not merely occasional requirements for exceptional projects. In fact, a majority of our survey respondents (34.5%) said they most commonly expect to book jets for routine business operations in 2010. The time you save really adds up.”

Almost half (48.8%) of the respondents to the international survey – all of whom were business jet passengers or bookers – named privacy as the second most-valued quality of business aviation compared to commercial airline travel. “We have seen how angrily British MPs and senior armed forces staff reacted to being told they must travel standard-class, rather than first-class, rail,” says Margetson-Rushmore. “People in responsible positions passionately believe that privacy and space enable them to work productively while travelling.

“Security was also cited by many respondents as a benefit of business aviation. That’s no surprise – when most of us think of airline security, we think of endless queues in airports. Business jets don’t just jump those queues; they fly right past them.”

George Galanopoulos, managing director of LEA, adds: “We were also interested to see from the survey that over half (58.3%) of respondents most commonly need an aircraft for 2-4 passengers. That feedback complements our previous research and supports our decision to invest in very light jets, like our six Cessna Citation Mustangs. The Mustang and the Embraer Phenom 100 are the perfect business aircraft for Europe, with ample space for the average group size and a nonstop flying range that comfortably includes virtually all Europe’s top destinations from the UK. But we’ve also got a fleet with enough diversity to meet all other executive aviation needs, from our Beechcraft KingAir 200s, executive turboprops for up to eight passengers, to the Dassault Falcon 900EX, which offers transatlantic capabilities for up to 14 passengers.”

The ‘LEA Business Travel Survey 2010’ was carried out in the first quarter of 2010, through an online poll of business jet passengers, brokers, tour managers, personal assistants and corporate travel procurement executives.