London, England, 2 December 2008 – The Ability Group (‘Ability’), the diversified private property company founded and led by Andreas Panayiotou, has acquired a site in the heart of historic, Grade I listed Syon Park in West London to develop a 151-bedroom, 13,000m2 hotel, which is to be operated by Hilton.  Development has recently commenced and it is expected that the property, which will offer an exceptional blend of parkland tranquillity and easy access to the capital, will welcome its first guests before Christmas 2009. 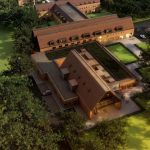 Syon House, with the surrounding 200-acre Syon Park, is the London home of the Duke of Northumberland.  Looking out across the River Thames onto Kew Gardens, Syon Park lies only eight miles from Central London and a 20 minute drive from Heathrow Airport, making it an ideal location for business and leisure travellers.  Under a long leasehold agreement granted by the Trustees of Syon Park, Ability is developing an elegant, upscale hotel within the ‘Capability’ Brown designed parkland, which will offer 1,000m2 of state-of-the-art meeting and conference facilities and several restaurants and bars. The spa being developed alongside the hotel is to be operated by Spa Chakra, marking the UK market debut of this exclusive international luxury spa network.

The hotel is to be operated by Hilton, with which Ability has established a successful relationship as owner of Doubletree by Hilton Cambridge and Doubletree by Hilton Dunblane hotels.  Ability will be working with Hilton on the new Hilton Liverpool project, of which it is to take ownership upon completion; this new landmark hotel in the centre of Liverpool is due to open in summer 2009.

Ability is highly sensitive to the historic importance of Syon Park and is implementing a scheme that is sympathetic to its setting, both in design and situation.  The details of the development have been agreed in close cooperation with the Trustees of Syon Park, English Heritage and Hounslow Council.  Ability is investing in the restoration and conservation of various Syon Park features, including the Adam oval carriageway in front of Syon House, and the Duchess Gate, which will be reopened for pedestrian use for the first time since before the Second World War.  Ability’s development of the hotel and investment in parkland restoration are key to the implementation of the Syon Park Estate’s 1999 Heritage Landscape Management Plan and 2001 Conservation Plan. It will include the restoration of of ‘Capability’ Brown’s original lake head to the north of the Great Conservatory, which has been lost for many decades, and, with the planting of specimen trees, will return the pleasure grounds to their former glory.

Andreas Panayiotou, Ability’s group chairman, said, “This is a rare opportunity to establish a luxury hotel for London in an idyllic and peaceful parkland setting.  With our growing international hotel portfolio, The Ability Group has both the financial strength and industry expertise to deliver an outstanding property that will surpass the expectations of hotel guests and visitors to Syon Park.  We are very pleased and proud to work with Hilton again in creating what is certain to become a sought-after international destination.”

On behalf of Hilton Hotels, Simon Vincent, president for European Operations commented: “We have ambitious growth plans through the Hilton Family of Hotels, where we aim to double the UK and Ireland estate from the current 77 hotels to more than 150 over the next five years. Working with solid owners and developers who are able to deliver multiple deals will make this possible. This is our fourth project with Ability in the last 12 months, which reflects the strategic importance of our strong relationship.”

This deal further reinforces Hilton’s position as a leader in upscale accommodation in the capital, with Hilton London Syon Park being the 19th Hilton hotel in London and the 21st upscale hotel – with the Courthouse Doubletree by Hilton London Regent Street now also part of the portfolio and The Bentley expected to join as a Waldorf=Astoria Collection hotel in the near future.

Rory Wilson, agent for The Northumberland Estates, which manages the Duke of Northumberland’s business interests, said, “We are delighted to be working with both The Ability Group and Hilton Hotels on this exciting project.  Syon is a unique place and the hotel guests will undoubtedly enjoy its unspoilt tranquillity. For us, the development not only sits well with the continued expansion of the weddings and corporate entertainment business run from Syon, but also provides a perfect opportunity to help safeguard the future of one of the many historic property assets under our ownership.”

The Ability Group was formed in 1996 by group chairman Andreas Panayiotou, who has developed a property portfolio valued in excess of £1 billion, comprising over two million square feet spanning 7,000 properties in the United Kingdom and Europe.  The Group is creating a £3 billion commercial portfolio and, to date, has invested more than £500 million in hotels across Europe.  Current hotel assets include the Hilton Liverpool, under development by Grosvenor; the UK’s first Doubletree by Hilton, located in Cambridge; and the Doubletree by Hilton Dunblane in Perthshire.  Ability is also to develop a number of other Hilton brands in the UK and Europe, with the intention of amassing a portfolio of over 40 hotel properties by 2012.

The Hilton Family of Hotels adheres to founder Conrad Hilton’s philosophy that, “It has been, and continues to be, our responsibility to fill the earth with the light and warmth of hospitality.”  The company put a name to its unique brand of service that has made it the best known and most highly regarded hotel company:  be hospitable®. The philosophy is shared by all nine brands in the Hilton Family of Hotels, and is the inspiration for its overarching message of kindness and generosity.

The Northumberland Estates represents the business interests of the Duke of Northumberland. The business remains true to its traditional roots of land ownership and management, with 120,000 acres of land currently under its stewardship. Around 4,000 acres are commercially farmed by Percy Farms, with the remainder in the hands of agricultural tenants or in forestry. The business has, over recent years, substantially diversified its commercial property portfolio to incorporate large scale development, investment and management interests, in particular in Alnwick, Prudhoe and on North Tyneside. The business also continues to manage a significant residential portfolio. Historical property interests include Alnwick Castle in Northumberland, Syon House in London and the Albury Estate in Surrey.

Syon House in Brentford, South West London, was built on the site of a medieval abbey and has been the London home for the Dukes of Northumberland for over 400 years.  The House boasts one of the finest Robert Adam interiors in the country and has a magnificent collection of paintings and furniture.  The 40 acres of Gardens contain the spectacular early 19th century Great Conservatory and an extensive collection of rare species of trees.  The lake, originally landscaped by ‘Capability’ Brown, is a haven for wildlife, and the vistas across the Thames-side watermeadows, still grazed by cattle, give Syon a unique rural environment so close to the heart of London.